Bangkok is reporting a Merry Christmas at this time. In the meantime, access to the Tracking Center at the North Pole has been shut off. All doors are locked at the moment. We just received word that Santa’s sleigh cam will be shut down in the coming hours and that only secured radio channels will be used.

I normally get my news from the radio chatter I hear between Santa’s sleigh and the Tracking Center. The elves on Santa’s sleigh report Santa’s position and the Tracking Center gives them detailed information about weather, Santa Secret Spy reports, etc all the time. There is usually lots of talk. It sounds like I won’t have access to those conversations in a little while for some reason. That doesn’t mean there won’t be news. It just means something important is about to happen. I will keep you posted. 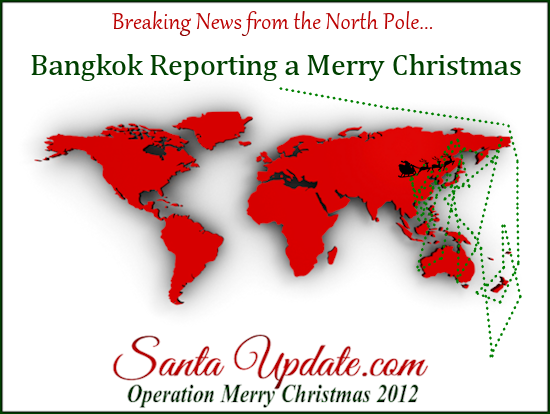 Kids in these places should be in bed by now:
Turkey
Egypt
Mogadishu
Barents Sea
Northern Russia