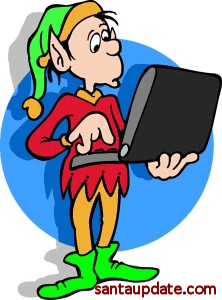 We’re getting a little nervous here at the North Pole. The big countdown clock in the workshop just ticked over to 100 days until Christmas…and that means time is running out.

Santa has told us he wants Santa tracking to become more personal. Rather than kids just following him on a map he wants everyone to know the story of Operation Merry Christmas and everything that goes on when Santa flies the world. That means he wants us to report the news and to tell the radio audience all that is going on.

How hard can that be, right?

Well, that is not the hard part. We have been sharing the news of Operation Merry Christmas now for decades here on SantaUpdate.com.

But we haven’t done it in our own voices before.

We’re afraid we’ll get nervous and mess up — or, say something really stupid. Elf Rusty Belz is a radio guy and he has done this for years. So he is not stupid.

But I’m just an elf. And so is Elf Victor and Elf Hugo and Elf Bernard and Elf Gloria and all the others who might end up on the radio.

At first, we thought that maybe Santa wouldn’t want the world to hear our voices. After all, when we travel he always tells us to never let people know that we are elves who work at the North Pole. We thought for sure Santa would want our voices to remain anonymous too.

But he said that was a goofy idea.

“I don’t want you to tell people you are elves when you are out in the world for your own safety,” Santa said. “It isn’t because I want to hide you! Don’t be silly. Let the world hear the smile in your voice, let them hear what a Merry Christmas sounds like. Talk on the radio, report the news!”

So we have been doing practice sessions of our Christmas Eve broadcast. Elf Rusty has been trying to teach us how to pronounce things on the radio and we’re just about ready to do a test program using news from last Christmas as we practice.

I’m so very nervous to do that. All week long Rusty has been trying to teach me how to say “You’re listening to live Updates from the North Pole on Kringle Radio”. I keep messing up by saying “You’re listening to Kringle Radio with live Updates from the North Pole”. Rusty says either way is fine but I know I mess up and then I say “arrrrrgggh!” and Rusty says I just can’t do that on the radio.

We will keep working on it and let you know when we are ready!