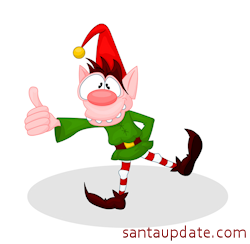 There is an airlift of sorts going on at the North Pole today. Hundred of elves in sleighs drawn by reindeer are headed away from the North Pole to attend the Annual Elf Convention. The convention this year will be hosted by Santa at an undisclosed location in Costa Rica.

Thousands of elves from around the world will be attending.

The Elf Convention is an annual affair that brings elves together to meet one another, learn new skills, gain some new contacts and obtain access to new training. While Santa attends the event (he is, after all, an elf, too) he generally only stays for a day or two because he doesn’t like all the attention on him.

How many kinds of elves are there?

Good question. There must be thousands! There are elves you know all about — toy makers, sleigh builders and reindeer keepers. But we also have elves who track weather, build Christmas lights, and decorate trees. There are elves who are scientists, researchers, doctors, teachers, truck drivers, counselors, and lawyers. In fact, just about any kind of profession you can think of have special individuals who work as elves in the Christmas effort.

Those who are lucky to work for Santa come to this convention every year. They will be here until Sunday, when they will head back home. It is one final chance to get away, to have a little fun and to learn a lot before the Christmas season really kicks in.

Santa has told us that he will be making some big announcements this weekend — not to the world, but to us, the elves. He has already said this will be a historic Christmas, one we will look back on years from now with pride to be able to say that we were here and played a part in it.

It is an exciting time to be an elf and working for Santa.

I’ll be sure to tell you all about it after I return from Costa Rica this weekend.