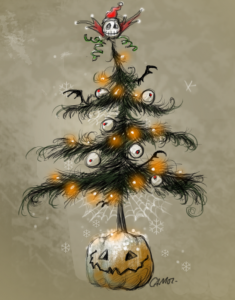 Happy Halloween! I received some email the other day after my last post about plans for our Halloween party tonight here at the North Pole asking me just what Halloween has to do with Christmas. The question came from 9-year-old Stephanie Wilkerson from Southern California. I’m so glad you asked that question, Stephanie!

The ancient traditions of Halloween are steeped in the belief that loved ones who have passed on are not really dead — that they are just sleeping. Like Christmas, different countries and cultures celebrate this in different ways.

Imagine a tradition where people get dressed up in odd costumes and go door-to-door seeking treats. Sounds like Halloween, right? But no — it’s Christmas!

Hundreds of years ago in some lands people believe that bad spirits would bring bad luck for the coming year if a family didn’t do certain things. Folks living then were mostly farmers and they needed good weather to grow food and to make themselves prepared for winter. That took a lot of good luck because they didn’t enjoy the modern conveniences of electricity or water as we know it. If they wanted food, that meant it had to rain or snow if they would survive. It took a lot of good fortune.

So the idea of luck was special to people and during the months after the harvest — when there was nothing left to do but to eat the bounteous harvest from the year before and to wait out the winter ahead — they would focus their time on getting rid of bad luck.

So they would dress up to hide their real identity from the evil spirits and do nice things for each other to drive them away. They would go door to door seeking treat in exchange for wishes of good luck from their neighbors. The more wishes they collected the better the luck they believed they would have.

We really like the idea of wishing people well on Halloween. And dressing up is just plain fun. Santa believes that Halloween is a good way to get ready for Christmas by allowing everyone to be together and to have a good time.

We hope your Halloween is fun, safe and enjoyable!