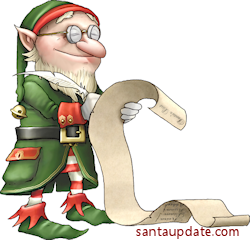 Elves are still working this morning to clean up the mess from yesterday’s Halloween party here at the North Pole. It was a wild night.

Santa said “green” was the theme for costumes this year and even though he didn’t give much notice there were many creative costumes last night. Quite a few folks came as Christmas trees. A couple arrived looking like the Jolly Green Giant. And a few even looked like the Joker, from the old Batman television show. Elf Kirby came as the Grinch and got booed when he walked into the room!

But the story of the night was not the costumes — it was, as it usually is, the food fight.

The food fight is a Halloween tradition here at the North Pole. Don’t ask me why. Perhaps that is because it is the only time of year that Santa lets us throw food and elves just love to throw food. We get crazy for it. It is just a lot of fun to smash a pie into an elf’s face or to dump punch all over his head. Everyone gets into it, every costume is ruined and there is always a big mess to pick up afterwards.

Santa started it this year. Santa came to the party in a costume, this year coming as Uncle Si from Duck Dynasty. He wore a green hat, a camo outfit and boots. Right after he announce the winner of the costume contest he started lobbing green grenades right from the stage. They were water balloons filled with warm, sticky green jello and they made the biggest mess of all last night.

Elf Dixie, who works with Mrs. Claus in the kitchen, had prepared an entire table of small cream pies before the party. Everyone knew what they were for. Not one elf even tried to eat one.

Once Santa started throwing the jello grenades several elves jumped for the table with Dixie’s pies but soon found it was a trap. As they headed for the table sixteen GIANT water balloons fell from the ceiling like huge bombs and somehow Santa rigged them to explode in midair. Everyone got soaked with the stuff.

Just as everyone was wiping green jello from their eyes Mrs. Claus showed up wearing a green wet suit (imagine that). She was holding a giant supersoaker in each hand and began firing streams of water into the crowd. Then food started flying everywhere and even Santa took a cupcake to the side of the head and got dunked face first in the eggnog. He came up out of the punchbowl looking like a drowned cat.

Somehow Elf Quentin knew everyone was going to be wet. He rigged what everyone thought were water canons with dry flour…and that really made a mess of everything and everyone.

We all ended up laughing, as we usually do, and playing in the mess until we wore out. We even danced and played limbo while covered in green jello and flour. Nobody seemed to mind how messy they all looked.

While a few elves remain this morning cleaning up from last night almost everyone else this morning is back to work here at the North Pole. There are big smiles on their faces.

With another great Halloween behind us, the elves are getting really excited for the days ahead. Big news is coming. You will want to be here all month as we ramp up to Operation Merry Christmas.