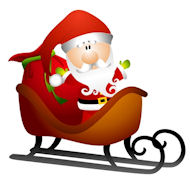 This question comes from many kids, but most recently from Kathryn in Lebanon: What if Santa’s sleigh cannot be fixed?

As you know from following here and at TrackingSanta.net, Santa has had a tough go with this year’s sleigh. It seems like he has had trouble with it since early November. One kid — Josh, from Tremonton, Utah, USA — said: “Why can’t Santa get this together? It’s just a sleigh. We have one and they are very simple.”

And that’s just the tip of the iceberg. Santa has to get around the world fast. And, more and more people believe in Santa each year which means Santa has to keep making the sleigh bigger and bigger and faster and faster in order to get it all done. Santa’s sleigh is one special machine.

Now, that being said I’ll tell you this: don’t worry about it.

You see, what most people don’t know is that Santa loves his sleigh like some people love their old cars. After Christmas every year Santa takes the sleigh he used and he takes it completely apart and puts it back together again, polishing each part one by one. Then he puts a special little sign on each one that says “Official Sleigh of Operation Merry Christmas 2013”, or whatever year that sleigh was used.

Santa has a special kind of sleigh garage out behind the sleigh barn where he keeps the sleighs — kind of like a sleigh hall of fame. They sit behind big picture windows and you can see them from a mile away, especially at night when the lights are on.

For Christmas in July each year we do a lot of fun things but perhaps the most popular here is the parade of sleighs, when Santa brings each sleigh out and hitches reindeer to them for the parade. The elves love the parade and Santa loves showing off his sleighs.

But Santa also keeps all those old sleighs around for a reason. If anything ever happens to his sleigh he has plenty of older sleighs to choose from. In fact, each Christmas Santa flies a new sleigh but ALL of his old sleighs are available and some are actually used for special missions on Christmas Eve. It is not unusual for Elf Quinton, under the direction of Santa, to send out dozens of sleighs every Christmas for one reason or another.

So don’t worry about the recent troubles with Santa’s sleigh. Santa is just trying to get it right.

When Will Santa Answer My Letter?

Does Santa Watch Me All the Time?
Scroll to top