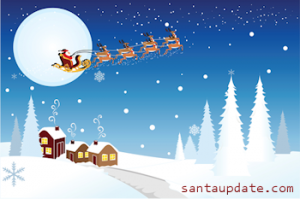 We’re hearing some strange rumors right now about Santa’s sleigh. There is a storm raging outside, as you know, and it has grounded the sleigh from further flight tests. But there is a rumor going around that Elf Quinton is going to send one very brave test pilot out into that storm to test Santa’s new sleigh one more time.

It’s not a bad thought. If that sleigh can punch through the storm the whole world is his playground for more than 24 hours. That would allow a test pilot to get a lot of work done.

I’m not saying it is going to happen. But if it does, we’ll be the first to tell you about it.

Big Question: Where is Santa now? Final Test Flight Gets a Go for Launch
Scroll to top