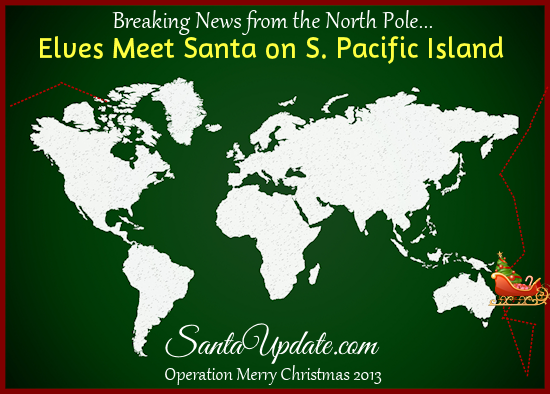 Indicators and sensors are tripping at Central Command at the tracking center showing that Santa’s sleigh is stopped and on the ground. Elf technicians have met Santa on a beach somewhere in New Zealand. We have reports that Santa has set out on foot while they tend to some sort of work on the sleigh.

“This is really unusual,” Elf Billy says. “Santa just doesn’t do much on foot because he’s got so much ground to cover. This has to be driving Elf Agent X and the guys over in security crazy!”

Elf Agent X does not have time to comment right now.

Apparently the elves are installing a new radio into the old sleigh. Santa wants to listen to Kringle Radio as he flies because the music being played there between the news updates from the North Pole was selected just for him. The old sleigh did not have a radio, we’re told.

Santa Spotted Over the Tasman Sea