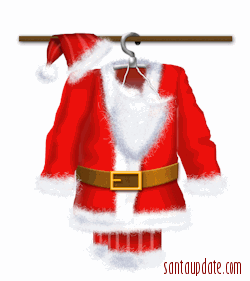 Santa may have experts working on building a new sleigh and scientists who help him figure out how to get around the world quickly but when it comes to what he wears on Christmas Eve Santa has just one person to help him: Mrs. Claus.

Santa’s suit is made by Mrs. Claus by hand. She works very hard to see that every part of it fits just so and that the suit entirely meets Santa’s expectations.

Santa wears his distinctive suit for a reason. He wants people not only to recognize him anywhere he goes but also he wants them to understand what the suit stands for.

The suit is actually very old in nature and ancient in design. The color red is the color of giving, a symbol anciently and today of selflessness, service and concern for others. The color white is symbolic for purity and goodness. Where there is white there is light and there can be no darkness. Only good things happen in light.

Even Santa’s hat has symbolic meaning. It’s distinctive shape stands for exactness in purpose, focus in intelligence and love of knowledge and learning.

Santa doesn’t always wear this suit. He usually wears it when he meets with children, when he appears in public and when he performs his official duties on Christmas Eve – when he comes to your home.

Mrs. Claus makes Santa several new suits every season. It takes quite a bit of time and a lot of work.

Sometimes little things change. The size of the collar, the position of the buttons, the way the trim is cut or even how thick the material is. Those things really don’t matter much just so long as the suit still says “Santa” to everyone.

This weekend, after the Halloween party, Santa went to get measured for his new suit. It is a tradition, one he marks on the calendar. By Thanksgiving Mrs. Claus will have something ready for Santa to try on and by Thanksgiving weekend there will be several new suits hanging in Santa’s closet.

It is all part of the countdown to Operation Merry Christmas…now just a few weeks away.