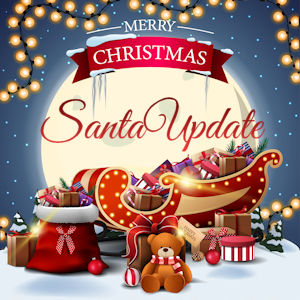 The reindeer listen to the sleigh bells in order to synchronize their efforts. That means they are a tool to help the reindeer pull as a team. Without them, each reindeer would be making slightly different movements, making for a bumpy ride that would cause the reindeer to work harder and thus not be able to fly as long.

But in order for the reindeer to fly together the sleigh bells need to work together too.

You see, the sound a bell makes when it rings is a musical note. If you just have sleigh bells of a different type all kind of scattered and out of tune with each other you would have chaos — a sound that is not pleasant at all to hear. So, those bells need to be tuned and matched very precisely.

Getting all those thousands of bells tuned just right and then placed just so on the sleigh is a process that takes weeks and days and great skill to put together.

For some reason the last few years that task has been held off to the last minute.

Well, Santa changed that this year. He had the sleigh bell department start tuning and placing bells in July. Today that process is done — a good three weeks before Christmas. And we’re all quite relieved.

It’s just one less thing to worry about — a complicated part of the Santa effort.

Another difficult part of the Santa effort is answering questions that have hard answers. One of the hardest questions to answer is the question of why people can’t come to the North Pole.

It comes up almost every day and children especially have a hard time understanding why that can’t happen.

I blame all the movies they watch. Movies make it seem like riding in a sleigh really fast with Santa is nothing unusual. Actually it is very unusual. It is cold, dark and scary. I don’t think most children would like it at all. Most elves don’t like it, though many of them, like kids, want to try it.

Anyway, someone asked this question of Elf Crash and in today’s news report on North Pole Radio News Crash talks honestly about why kids cannot fly in Santa’s sleigh to come to the North Pole. It’s a tough thing. But we hope the kids will understand this.