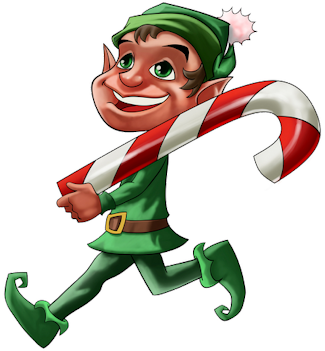 The Halloween party at the North Pole is always one of the most anticipated events of the year. This year’s was no exception. The day is broken up into 2 major activites: the costume contest and the Halloween party.

The costume contest has turned into quite a rivalry. Some of the elves start working months in advance to create some of the most elaborate costumes you have ever seen. This year’s winning costume belonged to Elf Rodrigo from the North Pole Post Office. He created a candy cane costume made out of actual candy.

“I use to work in the kitchen before I transferred to the post office” Elf Rodrigo said. “I started building the mold to pour the sugar into 3 months ago. Then I filled it with sugar to form the center and wrapped it with red and white sugar to form the stripes.” He gets to take the golden pumpkin home this year but I am sure there will be a stiff competition for it again next year.

The annual Halloween party hosted by Santa and Mrs. Claus is the highlight of the day.

If you have been following the updates over the years you’ll know that they tend to get a bit out of hand. This year was no different. We all walked into a beautifully decorated dining hall with giant pumpkin cakes in the middle of every table. Mrs. Claus told us all to take our seats but not to touch the cakes until she told us that we were allowed. Everything appeared very orchestrated and organized. We thought it a little strange when Mrs. Claus had waiters and waitresses dressed in tuxedos deliver a very fancy meal on white linens and her very best china.

Even though the rest of us were dressed in our Halloween costumes dinner was a very formal affair. It was quite strange to see elves dressed as ghost, gargoyles, monsters, ninjas, princesses and super heroes all trying to eat such fancy stuff. Mrs. Claus even had the Elf Choir singing background music along with the Elf Orchestra. Between the costumes and the formal dinner it was hard to tell if we were at a Halloween party or a fancy ball.

After all of the plates were cleared Mrs. Claus took the stage and asked us all if we were ready for dessert. We all clapped politely and she nodded at Santa.

Santa, who was also dressed in a tux and had helped to serve dinner, walked up to the podium and pulled out a little black box with a big red button on it. In a flash he tore away his suit (it had velco sides!), revealing a yellow rain slicker. He put on a red ski cap and a big pair of snow goggles — and then he pressed the red button.

Some of the elves dived for the floor knowing what was coming but most of us never had a chance. The cakes on each table exploded sending cake and frosting everywhere. Lights started flashing and from the ceiling descended giant water cannons — but they were not shooting water, they were firing jello. The food fight was on.

The elves started throwing pieces of cake and frosting at each other.

For all that chaos that ensued we discovered that Mrs. Claus had even organized the food fight. While one side was armed with soft tomatoes, cupcakes and little creme-filled pastries shaped like grenades the other side of the room was supplied with water bombs, super soakers and hoses. Elves from the kitchen staff were standing by in yellow rain slickers and googles like Santa with giant floor squeegees to wipe away the mess almost as fast as it hit the floor.

After each elf got off a few lobs of ammunition they were grabbed by the big elves from the Warehouse department and dropped down a giant slide that the workshop elves had built into the floor. It was like a waterslide only it was filled with orange kool-aid and it swirled the giggling elves round and round until it dumped them off in a giant vat of spaghetti noodles.

You’ve never heard such noise, most of it laughter and giggles from elves having the time of their live in a food fight fantasy filled with surprises for everyone.

The fun lasted about 15 minutes before Santa called for a cease fire and let each elf take one more slide into the spaghetti. The elves all chipped in and cleaned the dining hall up before they headed home.

I caught up with Santa and asked him why he lets the food fight happen every year.

Santa said “The crew has been working very hard all year long and they have a busy 53 days in front of them with little time off. The party and the food fight lets them blow off a little steam and have some harmless fun. It was a good thing this year. No one got hurt and it was probably a good idea to play in all that sugar than to eat it, I suppose. We work hard and we play hard here at the North Pole. They’ll all be ready for work in the morning because they had so much fun tonight.”

And Santa, as he usually is, was right. I walked around a bit this morning and saw all the smiles on everyone’s face. Things are humming here at the North Pole and hearts are already merry. We sure had a great time at the Halloween party — but the best days of the year are all in front of us!