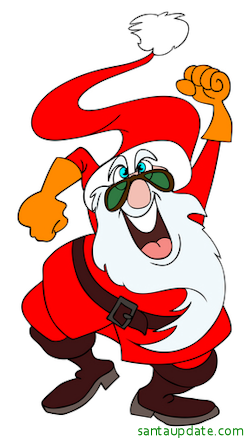 I talked to Elf Ed Zachary, a writer elf for the North Pole Gazette, who often has to deal with the difficult questions some kids write about Santa Claus.

“It is hard,” Elf Ed Zachary said, “For some kids not to be angry when they change their mind about Santa. Some think Santa is silly kid stuff, for babies. And others feel that older kids won’t accept them if they still believe. So they write things to make themselves feel brave. It is sad, but it is true. It usually just leads to them making an apology when they are older and they realize they are wrong.”

I talked to Santa about it too and asked him if he ever got upset by it. “No,” Santa told me with a smile. “I was seeing some kids the other day while I was at a mall, doing a little shopping. I sat down and pretty soon there was a whole line of kids. It happens almost everywhere I go. But this one kid, a big boy, refused to sit on my lap and said to me “You’re a fake!”. I asked him why he felt that way and he said “Because you didn’t give me a Play Station 3 for Christmas!”. I asked him how that made me a fake and he said “Santa always gets kids what they wish for Christmas!”. So I asked him if there could be no other answer for why he didn’t get what he wanted for Christmas and he said “No”. I said “It’s not because you don’t even have a TV? It’s not because your Mom didn’t want you having a video game? It’s not because someone in your house was a little naughty? It’s because I’m fake?”. He didn’t say anything after that. The other kids in the line were starting to get a bit upset with him.”

Elf Ed Zachary said some kids lose their belief in Santa Claus because in their mind it doesn’t make sense what Santa can do. “They start to ask questions,” Elf Ed Zachary said, “And they are really good questions like “How does Santa get around the world in one night?” or “What makes a reindeer fly?” or “I don’t have a chimney so how does Santa get into the house?”. And that’s my job, to answer those really, really hard questions about Santa Claus.”

Mrs. Claus told me that she used to get pretty upset when she would hear people say bad things about Santa. But she said she came to realize that it really meant that they didn’t understand Santa. So she feels it is pretty important to teach kids about Santa and how he works and what he is all about. She has been speaking in schools to children all over the world to help educate them about Santa Claus.

For now, I’m going to let Santa, Elf Ed Zachary and Elf Hugo look at Santa’s mail. Elf Hugo sends me the mail about general questions about Santa. And I can deal with those. I’ll let them handle the hard stuff.