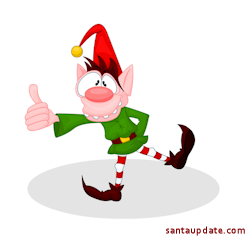 Elf Hugo in the North Pole Post Office says yesterday’s update about problems in Santa’s workshop really brought in the email from the kids. So much so that even Santa called in to see what was going on.

“Whoooo, boy!” Elf Bernard said. “Did I ever hear it from Santa. He showed up at the workshop late last night after taking an express sleigh home to the North Pole. Seems he was out visiting with kids and families the past few days all over the place and he flew in from somewhere to see what was going on! You should have seen everyone step it up in the workshop when the boss walked through the door.”

While Santa was here I asked him how he felt about things in the workshop. “Everything is fine,” Santa said. “The situation is completely normal. These things happen at Christmas. I think we’ll be just fine and I think that Mrs. Claus’ plan to up the number of sugar cookies the crew in the workshop has to eat is a good one. We’ll be ready for Christmas just fine.”

Elf Hugo, however, was not as positive.

“Those guys over in the workshop have to understand that even if they burp a bit of trouble about things it puts more pressure on us.” Elf Hugo said. “Elf Victor starts talking about reindeer babies and the next thing we know kids write in like crazy suggesting names. More than 10,000 names a day are coming in. Then Elf Bernard talks about the workshop and kids all over the world write in all worried about it. You guys in the newsroom need to get a handle on this. All this email is a lot to process.”

I asked Santa about that, too, and again he just laughed. “Okay,” Santa said laughing, “We’ll get Mrs. Claus to double up at the Post Office, too. I want all the kids out there to write and email as much as they want to. Your job, Elf Ernest, is to tell the truth and to give them the news. Don’t worry about the news being good or bad. A good reporter always tells the truth and you’re doing a good job. I like getting all the mail, it tells me the kids are listening!”

In other news, the Elf Choir is going to try to rush a CD out to market before Christmas. Elf Rusty Belz has that news in the audio upate for Merry Christmas Radio, just click on the link below.

News from the reindeer games should be coming in soon!