Santa has made his first stops in Europe. Reports are starting to come in from Finland, of all places and even a few places in Poland are now reporting. We expect to being from major cities soon. Hang on to your hat, folks. It is about to go by very quickly.

Meanwhile, up at the North Pole some good progress to report. The workshop has completed their duties and all hands are now working in the Wrapping Department, even Elf Bernard.

“I’m pretty lousy with paper and tape,” Elf Bernard said. “If you get a present that isn’t wrapped to well this Christmas, it’s probably from me!”

At this point, with the workshop done and Santa back in his new sleigh with his A-team of reindeer of Rudolph, Dasher, Dancer, Prancer, Vixen, Comet, Cupid, Donner and Blitzen I would say that things are positioned well for success on Operation Merry Christmas 2011. 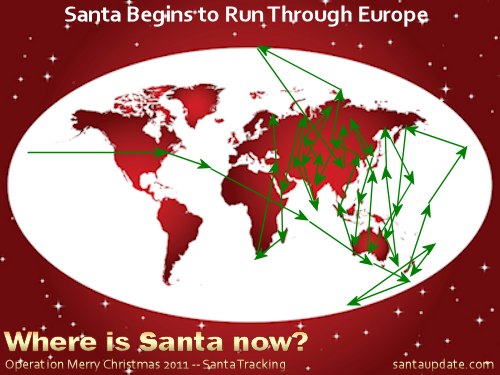