Remember those presents that were shipped from the North Pole because the Wrapping Department fell behind the other day? Apparently they were shipped to a large aircraft carrier Santa had positioned in the Pacific Ocean. Elves there have been wrapping like mad and now they are helping to load them onto Santa’s Sleigh.

Elf Wally stopped by my office after he read the last Santa Update. “Yes,” he said. “I know all about it. That is Santa’s aircraft carrier. He has a couple of them, I guess. Don’t ask me why. But when we met last week to talk about this problem he had me send crews and supplies to work on the ships. He talked like it was no big deal.”

Shortly after Elf Wally left my office I got a call from Elf Agent X. “Listen, Ernie” he said. “I’ll tell you about that aircraft carrier but only if you promise not to tell a soul.” I told him that Elf Wally already told me about it.

Santa should be on his way again soon. 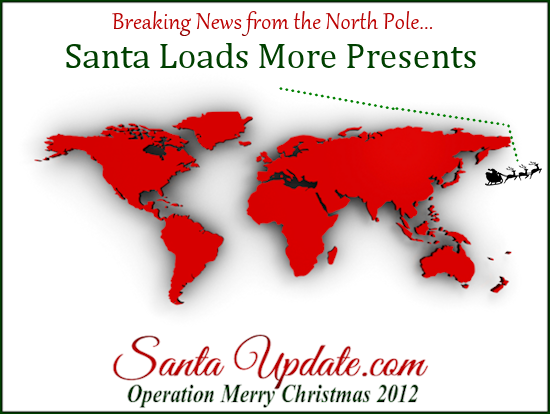 Kids in these places should be in bed by now:
Sydney
Pago Pago
Kamchatka
Fiji
New Zealand
South Pole