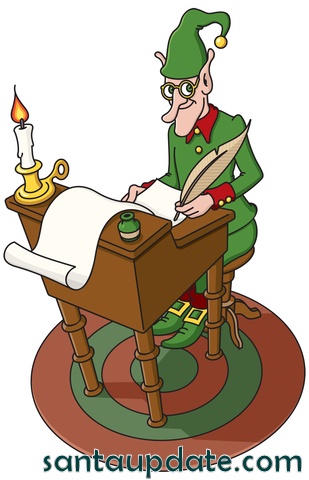 Have you got the hang of TrackingSanta.net yet? Elf Billy wanted me to ask.

The prize is a ride in Santa’s sleigh.

No, not on Christmas — in New Year’s Day.

Every elf wants to get a ride on Santa’s sleigh even on a day that is not Christmas.

In fact, every kid I know does too.

Santa just doesn’t do it. I know you’re going to ask me why and I’ll tell you: Santa’s sleigh goes very, very fast. In fact, he doesn’t even take it himself that often, usually only on Christmas or at other times when he is in a hurry. Most sleighs are pretty slow but Santa’s sleigh is ultra fast, the fastest vehicle ever. Santa doesn’t wear a seat belt or a helmet and he’s never fallen out. But he’s scared to death that someone else might. So he just doesn’t take passengers with him on THE sleigh.

He might give Mrs. Claus a ride a few times a year but even for elves there are very few of us who have actually been on Santa’s sleigh with the flying reindeer and jingling bells and everything.

So it is no wonder elves are writing poetry like mad today.

I told that to Santa a little while ago and he chuckled. “They would never write poetry before,” he noted. “So this is a good thing.”

That’s true. Most elves are not poets.

What Kind of Cookies to Make for Santa? Is Rudolph Sick?
Scroll to top