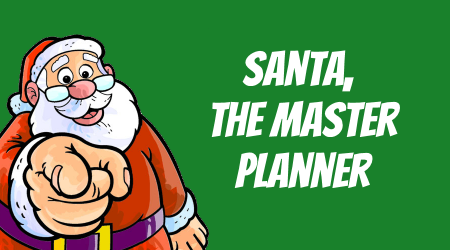 The month of January seems silly to some. Gone are the days of anticipation for Christmas and with that it seems Santa and the North Pole are forgotten. After the brief post-Christmas rush of thank you cards and letters to the North Pole post office it has actually become very quiet. January seems silly because Christmas is so far away and nobody appears to be thinking too much about it.

This is admittedly a season for a little fun at the North Pole.

Santa organized sleigh races for the reindeer and the elves. After all, what was he to do with all those sleighs he built last year? He put them to use in a kind of Olympic-style competition for those who wanted to play. There were races on the ground and in the air. There were races with themes — the water race, the keep-the-hat-in-your-head race, the egg race and the midnight race, which was a scary race downhill in total darkness.

For weeks now there have been nothing but games and fun going on at the North Pole and nobody has been more center to it all than Santa.

I heard a laughing bunch of elves gathered around a bonfire in the middle of fruitcake toss festival the other day talking about whether Santa planned for all the fun they were having in January.

The answer, of course, is that Santa DID plan for this. Santa rarely does anything without a plan, even if it is for play. In fact, I would say Santa plans his play to help his work and his work to help his play. There is purpose behind everything Santa does.

He is the Master Planner.

I can tell you right now, even though it is January, and he’s enjoying a little “time off”, Santa’s head is thinking of all sorts of ideas for next Christmas. He is thinking about every bit of it.

In fact, I think about the only time Santa is planning something is when he is maybe flying his sleigh on Christmas Eve. That, he tells me, takes a lot of concentration.

Planning, you see, is kind of like play to Santa. He loves to plan. He loves to imagine things. He loves to think ahead — far, far ahead. He dreams first of what Christmas will be like and then slowly puts the pieces in place to make it happen.

Magic, Santa says, is no accident. This is one of the fundamental things they teach us in elf school. Magic takes planning and work — and love for both of those.

Nobody likes planning better than Santa. In fact, sometimes Mrs. Claus has to get him to take it easy with it a little bit. For example, one year a little girl wrote in that she had experienced cotton candy for the first time at a summer fair and she was sad because that was the only time and place she could get the stuff. She actually asked Santa for some cotton candy for Christmas.

Mrs. Claus was not happy. Not only did she not appreciate the mess he was making in the kitchen but she thought the pink, fluffy Christmas tree he made from cotton candy looked ridiculous. She finally sat Santa down and said, “She just said she wanted cotton candy for Christmas. Why not just give her cotton candy, Santa?”

Santa could only chuckle about the whole thing. Mrs. Claus, he said, was right. Not every idea turns into a plan but great things happen because Santa loves to make things happen.

So don’t kid yourself. Yes, there is a lot of playing around at the North Pole these days.

Next week we start to get back to work here at the North Pole.

It begins with a meeting — a planning meeting.

11 Months Until Christmas
Scroll to top