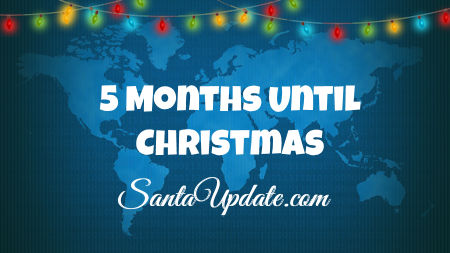 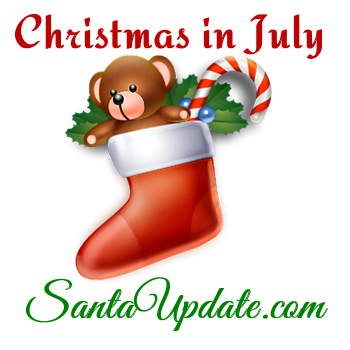 Happy Five Months until Christmas! The 24th of July every year is a great day. It is the biggest day of Christmas in July.

Yesterday afternoon, as some were napping while listening to Santa tracking on Kringle Radio, Mrs. Claus showed up at the community center with pies. Lots of pies.

We had lunch and then each of us lined up to get a piece of pie. It was all very orderly.

A bunch of intern elves working for Mrs. Claus and working this summer to learn the art of baking Christmas cookies started to bring in racks and racks of very small pies. These pies were about four inches in diameter — perfect for just one person.

Even better, each of these little pies were covered with equisite whipped cream topping. So we really couldn’t tell what kind of pies they were by looking at them.

It turns out they were all Dutch Chocolate Cream pies but that no longer matters. As it became clear that there would be enough pies for each elf to have several lines started to form around the room.

But Mrs. Claus could see very quickly what was about to happen. Elves just can’t help themselves in a situation like this.

She knew that if we could all get our hands on the pies at one time there would be a food fight. It has happened many times before.

So before anyone could do anything she made each line form up in the middle of the room and then each elf had to pinky swear with every other elf not to throw pies.

Instead of what could have been an epic Christmas in July pie fight we all got the chance to fold bakery boxes so that we could take our pies home with us.

It was a fun day anyway and we did have a good squirt gun battle outside in the middle of the day yesterday. Today there will be a ceremony of some sort to mark down 5 months to Christmas and I hear that Elf Bernard is going to be giving a speech.

I’m sure we will have a great time. But honestly, there are a lot of rumors going around right now.

Christmas in July is supposed to go through the end of July, right? But I’m hearing rumors of a lot of meetings being held starting on Monday. I haven’t been called to any meeting and I don’t know anyone else who has been called to a meeting, but that’s the rumor.

What I’m hearing is that Santa wants to be ready to lauch really, really early this year.

Does that mean we will have to re-set the clock? What DOES that mean?

I do not like to report on rumors. But I did see Elf Winslow talking with Santa today and writing notes down like crazy. Santa and Winslow are pretty close these days, after their experience earlier this year on walkabout.

I know Winslow will have a special job for Christmas but I don’t know what it will be. So far, since coming home, he contines to work by Santa’s side most of the time.

Winslow’s getting around.  Important elves are nodding very seriously. Something’s up.

I’m just the elf in charge of the news department. Nobody is going to talk to me about a meeting. Whatever it is, I’m sure Santa is going to call me this weekend.

So we might have some news yet. In the meantime, enjoy your Christmas in July, wherever you are. And be safe!