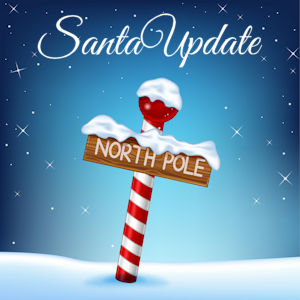 Heavy snow and late reindeer seem to be all that people are talking about at the North Pole right now.

The reindeer still have not shown up. Elves are publicly asking the question “Why?” in the letters to the editor section of the North Pole Gazette. I think poor Elf Victor, head of Santa’s Reindeer Department, is tired of answering the question.

But here is the truth: the reindeer do not actually need to be here until December 23rd. That’s weeks away still. Why worry? Santa’s not worried. Elf Victor is not worried. So why should the rest of us be worried. It’s all the elves are talking about these days.

I think many of them are afraid of missing one of their favorite events this Christmas: the annual Reindeer Games.

They are a very popular event here at the North Pole. Everyone watches them as much as they can when they are not working. Then, after work, many of them go home to watch the tape delay event on local TV. It’s kind of like a Christmas Olympics.

Santa thinks people make too big of a deal about the games. After all, they are just part of the training routine the reindeer take up every year in order to be ready for Santa. But one of the elves let it slip that we watch the games on local TV and the next thing we knew there were offers and pressures from mainstream media sports networks to put the games on international television.

A few years back, there was a little reindeer named Pee-Wee who took a 50-yard dash preliminary race from Donner. Pee-Wee was his name because he was just a tiny little guy who was sneaky fast. I think he kind of surprised Donner.

Anyway, Pee-Wee became very popular very quickly. It seemed a lot of elves were rooting for him all of a sudden. Someone even started selling “I’m as Fast as Pee-Wee” t-shirts at the hardware store in North Pole Village. It was crazy how fast that whole thing happened.

But then a few days later in an elimination round of the competition Pee-Wee went up against Donner again. And Donner beat him good. I mean it wasn’t even close. Donner felt bad about it because Pee-Wee took it kind of hard. You see, in the first race, Donner was racing after having been sick for a few days. In the second race, he felt great and I think, if the truth is to be told, Donner didn’t like losing the first time around. So Donner was really intent on winning that second race.

He just never thought Pee-Wee would take it so hard. After it was over, and Donner won, he took Pee-Wee aside and talked to him in their reindeer way. Today, Pee-Wee is a trainer reindeer and he and Donner are good friends. But that race taught us all about the games and how competition, while fun, can sometimes teach hard lessons.

This is why Santa doesn’t want a big deal made of the games. The games are to help the reindeer to prepare. It’s not to make them famous.

Snow is another hot topic of conversations. The week of Halloween hit and its like someone turned on a snow machine here at the North Pole. We’re already buried in it! You can hear Frank and Crash talk about it on their news report on Kringle Radio from yesterday — in the player below.