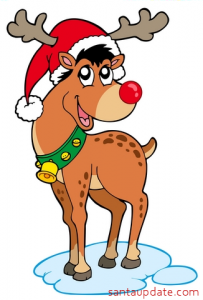 What an incredible story unfolding at the North Pole at this hour! All of Santa’s reindeer appear to be healthy and they are getting ready to fly. According to Elf Victor, the credit goes to the baby reindeer born over the past month at the North Pole.

As Santa’s reindeer started to get sick earlier this week Elf Victor isolated the reindeer babies and their mothers because he really didn’t want the young ones to get ill. They were moved to a camp located about 80 miles away from the North Pole, a place where reindeer are trained during to the off-season. He thought they would be safe there.

When Santa showed up and saw how miserable Blitzen was he suggested to Elf Victor that he reunite Blitzen with his family. It took Elf Victor a while to find his family because they were all at this reindeer camp some 80-miles away. They came to be with Blitzen and when they walked into the room Blitzen seemed to perk up a little bit.

Just then, Santa was on his laptop reading his email from some of the kids and he got one from 9 year old Rory Swanson of Tennessee, in the USA. Rory suggested that the reindeer babies could fly Santa’s sleigh this year. Another note, this one from 7 year old Missy G. of Texas in the USA, suggested the same thing. This got Santa thinking and he told Elf Victor to get all the reindeer babies back home to the North Pole and to put them together in the barn.

They did that and within an hour the sick reindeer started one by one to get up from the hay and started walking around. Soon, some started playing together and then they started running. The baby reindeer thought this was funny and they started to laugh a little bit. Pretty soon everyone was smiling and feeling better.

“It’s the kids,” Santa said. “They saved Christmas this year. If you look at my email the kids have been telling me for hours the trick to this problem was the baby reindeer and they were right. Let’s get on with Operation Merry Christmas!”

The reindeer — thousands of them — are back at Santa’s Stables and Elf Victor is trying to organize them all. We should have a schedule soon of what the new plan is but for right now it appears things are back on track here at the North Pole.