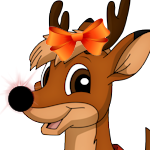 Vixen was declared the winner of the Reindeer Games today at the North Pole.

As bitter cold temperatures descended on an already snowy North Pole the decision was made to end the games a little early. Thanks to some adjustments by the games committee the majority of the outdoor events were moved to Monday and Tuesday of this week. Donner suffered a bruised rear left leg and was withdrawn from the competition on Monday.

Blitzen did continue to compete but did not perform as well as expected. Team Blitzen explained that he was under the weather for much of the month of November and that he just didn’t have time to train as is his custom. So he was not as strong as he could be.

Santa decided to end the games also because Vixen had pulled ahead in points so much that nobody was going to catch here.

“Vixen worked very hard this off-season and arrived here in shape and ready to compete,” Santa said. “Clearly she was the best out there this year and I really appreciate her effort. She showed what a great leader and example she is. I’m so proud of her.”

It has been a controversy for several years  that the boy reindeer and the girl reindeer should compete in separate games. It is very rare that one of the girls will win. Santa and Elf Victor, however, feel differently. The reindeer all have to pull the same weight on Santa’s sleigh every Christmas. There are minimum requirements expected of each just to be on Santa’s team. Because each of the reindeer meet those requirements, and the games are built around the same standards, Santa has never seen fit to separate the reindeer based on gender.

“Vixen proved this year the girls can win,” said Elf Victor. “This is why Santa keeps a good balanced mix of boys and girls on the team. They each have their own talents and abilities they bring to the table. He needs them all for what they can do. The games are fun and the games give them a chance to compete. But when they are over, we come together. We celebrate Santa, we celebrate Christmas. Between now and Christmas Eve the training shifts from individuals to teams.”

Both Santa and Elf Victor congratulated all the reindeer. “The important thing,” Santa said, “Is that we are all safe. This virus thing that is going around is something we have to protect ourselves from. But at the same time, we have to keep our reindeer healthy. They can’t catch the virus but if we were to play in blowing snow in sub-zero weather like we have right now at the North Pole that would be asking for an injury. We don’t need that right now. So it was a good decision.”

According to Elf Melanie, Lead Reindeer Trainer at Santa’s Stables, all the reindeer are in excellent condition. She said that even Donner will be more than ready to go for Santa’s flight.

So the games were a little shorter this year. So what? Everything in 2020 has been a little different. It’s okay.