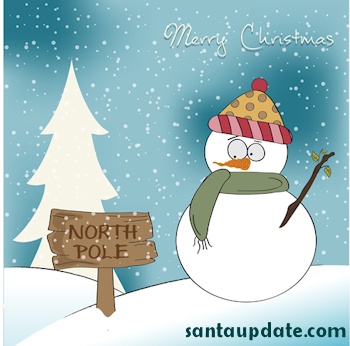 A nasty winter storm has descended on the North Pole, slowing progress in several departments working on Operation Merry Christmas.

Over at Santa’s Stables Elf Victor was planning on taking the one-year-old reindeer out for their first flying class of the season. One-year-olds are too young to fly for Santa on Christmas Eve but many of them can fly and Elf Victor tries to work on them in advance of next Christmas when most begin their careers working for Santa. But in this weather Elf Victor doesn’t want to chance it. The reindeer will stay inside until the storm blows over.

At the Tracking Center lots of good is coming from a bad storm. The electricity was knocked out right away from the storm and the center lost all power. “We lost our ability to communicate to stations in Japan, Australia and eastern Venezuela,” Elf Billy told me. “We have to get that fixed before Santa flies, so this was actually a good thing for us.”

The storm grounded elves working in the sleigh barn on Santa’s sleigh. “This new sleigh is really delicate,” Elf Quinton said. “The changes we’re making are small and after each one we have to do new flight tests. It is time consuming and tedious. And while we do have to test in bad weather we don’t need this kind of weather right now to test in. So it is inconvenient.”

I tried to talk to Elf Bernard in Santa’s Workshop to see if the storm was slowing them down but I received word that Elf Bernard was too busy trying to catch up to talk to me. I’ll get to him later, when he has time.