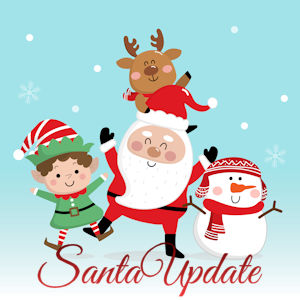 Santa returned briefly to the North Pole specifically for medical tests. Although these tests are routine many have looked at them this year in suspicion that maybe something is wrong with Santa. We assure you that he is just fine.

Viruses have been a big concern at the North Pole for many years. It was about 25 years ago that the North Pole was hit, for the first time, with the Bah Humbug Bug. It is a virus that affects elves and reindeer alike and saps them of their Christmas spirit. The first season it hit the North Pole really struggled. A “cure” was found in an eggnog-flavored elixir that is still available at the North Pole should the disease make a comeback. It was last seen about four years ago but there have been no traces of it found ever since.

Elf Dr. Lionel P. Spock, in a press conference earlier today, announced that Santa tested negative for all known sicknesses and is free to resume his planned schedule. Lionel also announced that the North Pole remains “virus free” at this time.

Every precaution that has been taken during the global pandemic has been continued at the North Pole. Work spaces have been adjusted, social distancing is in place and masks are still apparent in crowded situations. Dr. Lionel said this year so far appears to be “normal” with season colds.

Santa will continue to be tested right up until flight time and, of course, he employs strict protocols everywhere he goes.