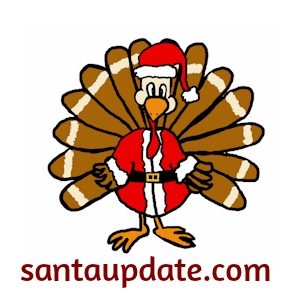 The North Pole will celebrate a grand Thanksgiving and you’re invited to check in on it.

The day begins with the Thanksgiving Day Elf Parade, a tradition at the North Pole for many years now. Elves long ago adopted the hobby of trike riding in the Elf Parade and nearly every elf joins in the fun. All this week elves have been decorating their trikes for this big event.

What might make it all interesting is the snow in the forecast for Thanksgiving Day. The North Pole is celebrating more than 30 straight days of constant snowfall and snow is quite literally everywhere. While city workers and elves have been working the parade route all week the snow received late Tuesday and forecast as well as for tonight and tomorrow will render those efforts useless.

But parade participants are determined to “go on with the show”, including elves who will be working on modifications to make their trikes more snow worthy. We can’t wait to see what they do to the trikes to keep themselves moving.

Thanksgiving Day is filled with games and activities long after the parade is over and the late afternoon feast is begun. There will be the North Pole Bowl, a football game between the girl elves and the boy elves, as well as the World’s Largest Snowball Fight.

Someone mailed in asking if there would be a food fight for this event like there was for the North Pole Halloween Party. The answer to that is most definitely “no”.

After the parades and the games of the day are over, dinner is actually a very formal affair. As you know, Thanksgiving is Santa’s favorite holiday and he likes everyone to dress up for dinner. Elves love this idea too because it makes the kick off for Christmas that much more exciting.

After the meal is over Santa and Mrs. Claus lead everyone around North Pole Village to look at the Christmas lights. This is a slow but orderly affair that everyone really enjoys. Santa likes to take his time as he goes from house to house to admire the hard work that goes into all the displays. Decorating this year has been a challenge because of all the snow but the snow is part of the reason people are excited to see the lights this year. Most believe the snow makes the lights look prettier.

All of these events lead to the kick-off of Operation Merry Christmas which begins in Santa’s Workshop just after midnight.

With all this stuff going on Thursday there is a level of activity at the North Pole today that is very exciting. All are working on their special projects for Thanksgiving, whether it is their trike, their parade outfit, their food for the Thanksgiving feast or their Christmas lights for the evening walkabout.

So it’s a happy time!

We have a North Pole News Radio report for you to listen to today. In it Elf Crash Murphy tries to answer some of the strangest questions he has received. You don’t want to miss this one.